Here in Germany, especially in a region where many apple trees are grown to make juice, it is very common to give your apples to a 'winepress'. The apples are juices and the juice is cooked. After that you get the juice in a plastic bag of 5 or 10 liters. Such a plastic bag is fragile and hard to carry so you stuff them into a box made from carton. That's why the're called 'Bag-in-Box'. Now, when you store a bunch of those cardboard-boxes they tend to degrade over time in particular if you reuse them the year after.

A friend asked me if I could make such a box out of wood. My solution is a box that can be flat-packed for storage, while being solid enough to be used several times. The top has a snap latch and multiple boxes are stackable. As there was a little room on the base-material I even added a little stand which tilts the box for easy access.

Because the box looked a little like a massive animal I was tempted to add some eyes and ears, refrained from it though ...

Out of pure fun I created a assembly instruction.It might help using the right order of steps, but I am rather sure anybody would be able to assemble a box without any help. 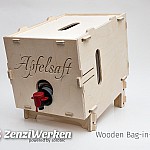 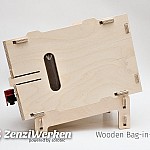 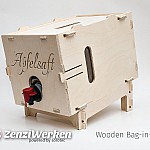 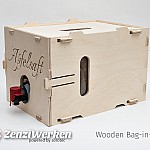 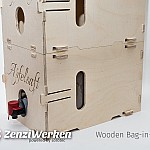 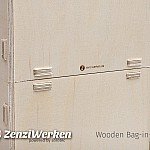 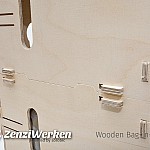 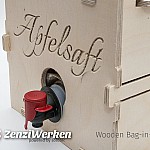