Why on earth create such an object? I'm a father of 3 and all of you sharing my fate probably know it really hard to get your kids to do things like clean up the room or even place the used toothbrush in the holder. This is my attempt at making them do it ... with fun!

... plus I had the urge to create my first 'real' 3D object. Using a cnc to cut a 3D relief is very popular, but due to the limitation of my machine I left it to a few unexciting trials so far. This time I was determined to go the whole way.

Staring out with the demand of an actual 3D object I used Sculptris too paint a pigs snout. After a few minutes, I had a usable result. Simplifying the resulting stl in MeshLab (reducing the triangle count) I went over to Fusion360 to create the final stand shape. I had to scale the part, cut off the top and extrude the foot.

The result were two versions: one with the relief on top and the stand extruded and one that had only the top containing the relief. That is what I used as my material thickness was limited to 20 mm. The G-code was generated with Estlcam. The parameters are quite clear. I made two (smaller) test cuts, first on styrofoam, then on MDF. The final result was cut on oak. A second layer gave the thing it's final thickness. Estlcam lets you extrude the contour of a stl, so this was a fast operation.

Apart from the prolonged machine-time, a 3d relief takes I was rather unhappy with the results from my desktop cnc by Stepcraft. The z-height seems to be too unstable and was leaving streaks on the surface. The cutting process itself went well. I used a 3 mm upcut endmill especially designed for wood to remove the most of the material and a 3 mm ball nose end mill to get a smooth surface. Not even sanding the workpiece did not remove all of the streaks, but a little mineral oil showed the wood structure and made the object ready to be used in the bathroom. 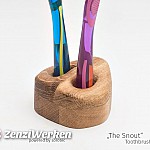 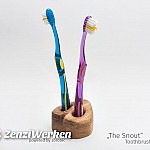 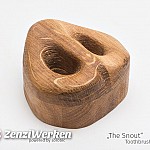 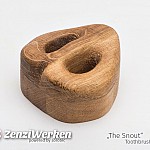 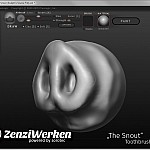 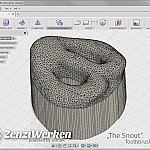